Gwen Robbins Schug is a bioarchaeologist interested in paleopathology, paleodemography, long bone ontogeny, bone histology, and South Asian prehistory. The majority of her work is focused on understanding health and biocultural adaptations of human populations in South Asian prehistory. She has worked with a wide variety of skeletal collections and her work consequently addresses a wide range of subjects and skeletal collections spanning 10,000 years of human history in India and Pakistan.

Dr. Schug most recently began work on a project entitled, "Bioarchaeology of Harappa: Anthropological Research And Training (BHARAT)". This project seeks to understand life at one of the least well known cities in the Indus Civilization using the human skeletal material from excavations that occurred at the beginning of the twentieth century. The goals of this project are to 1) understand who was buried in the cemetery and why only a small fraction of the city's residents were buried; 2) examine the heterogeneity of frailty (health status of individuals who died in the perinatal, infant and childhood life stages, as opposed to the population of adults); 3) examine the pathological profile at Harappa, specifically the presence and prevalence of infectious diseases; and 4) examine evidence for skeletal trauma--accidental injuries, interpersonal violence, and medical intervention. With the help of ASU graduate Kelsey Gray, Dr. Schug inventoried the skeletal assemblage of approximately 200 individuals from Harappa and collected osteobiographical data from January to July of 2011.

The first presentation of the results will be in an invited session at AAA in Montreal, November 2011. This talk deals with evidence for traumatic injury, interpersonal violence, and surgical intervention and it is entitled "The Laughing Harappans: Myth and Legacies of Structural Violence". From 2600-1900 B.C., Harappa was one of the largest, most populous cities in the Indus Civilization of South Asia. This city was part of a network of over a thousand settlements that shared trade goods, technology, seals, symbols, systems, and ideas. Twenty-six seasons of excavation at Harappa have revealed traces of an urban lifestyle in protohistoric India. This paper reports the results of a recent analysis of the prevalence and patterning of trauma in previously unstudied skeletal populations excavated from multiple cemeteries used in the urban and post-urban phases at Harappa. The results demonstrate that there is no evidence for interpersonal violence consistent with invasion or warfare, supporting the myth of the Aryan Invasion. Rather, the majority of interpersonal violence occurred against women and children. Cranial fractures were also strongly associated with the presence of congenital and communicable diseases. One male with a cranial fracture consistent with interpersonal violence had received a craniotomy, perhaps as a form of surgical intervention to relieve the effects of trauma. Women and children suffering from highly visible and often stigmatized diseases were thus disproportionally affected by interpersonal violence without benefit of available surgical intervention. This pattern can conservatively be interpreted as evidence for social hierarchy at Harappa but it appears likely that structural violence—unequal power, uneven access to resources, systematic oppression, and exploitation that kills through the denial of basic needs and outright violence—also existed at Harappa.

The Indus Civilization is widely known as a "peaceful realm", a rare example of an urban civilization without social hierarchy or evidence for interpersonal and inter-community violence. Dr. Schug's most recent research project has uncovered new evidence suggesting that although there is no evidence of warfare or invasion, women and children disproportionately suffered traumatic injuries consistent with inter-personal violence. This image shows three views of the cranium of one of these children from Harappa. These individuals did not receive available medical interventions and were subject to different mortuary treatment than the majority of burials at Harappa. These new data will change accepted interpretations of Indus Valley life. They will be presented at AAA in November 2011 and will be published in the near future.

This project was funded by a Fulbright Research Fellowship from the United States India Educational Foundation. The research project was inspired by Dr. Schug's earlier research uncovering evidence for leprosy at a post-urban outpost of the Indus Civilization. Dr. Schug and colleagues published a paper describing ancient skeletal evidence for leprosy at the village of Balathal. The skeleton was interred in a layer dated to 2000 B.C. It is known from molecular evidence that Mycobacterium leprae evolved in Africa but the pattern and process of migration out of Africa, and it's relationship with human communities since that time has remained a mystery. The presence of leprosy at an Indus outpost in Rajasthan around 2000 B.C. indicates that the disease was present in Indus communities by the end of the urban phase and suggests that other skeletal series from the Indus Civilization should be examined for evidence of the disease. Hence, Dr. Schug wrote a grant to examine pathological conditions in the skeletal material from Harappa and Kalibangan. The results of the pathological analysis were significant and will be forthcoming over the next few years.

Also as part of this project, Dr. Schug recently (in July, 2011) sent three samples of bone tissue from the Balathal leper to an expert in ancient pathogen DNA analysis, Dr. Helen Donoghue (Senior Lecturer, Center for Infectious Diseases and International Health, University College London). Over the next few months, we will learn whether DNA is preserved in the bone. Given a positive result, Dr. Donoghue will attempt to extract and amplify aDNA of M. leprae and M. tuberculosis from the Balathal skeletal material. By comparing the ancient and extant strains of the pathogen, we can reconstruct the origin and evolution of leprosy and perhaps even gain new insights into the relationship between leprosy and tuberculosis, both important infectious diseases in human history. All of this will depend on whether the pathogen DNA is preserved in the tissue so keep your fingers crossed! 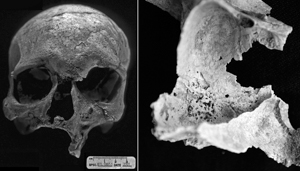 In 2009, Dr. Schug published a paper reporting the oldest skeletal evidence of leprosy in a skeleton from the post-urban Indus site of Balathal, Rajasthan, India. This skeleton demonstrated lesions considered highly diagnostic for leprosy (left image). Dr. Schug originally examined this individual in 2001. On her return to India in 2011, not much was left of the cranial skeleton. The left maxillary sinus is open and it is now possible to view the massive destruction to the cortical bone surface inside this sinus (right image). Samples from the skull, pelvis, and tibia of this individual were sent to UCL for ancient DNA analysis in July, 2011. Hopefully molecular work will provide new insights into the evolution and migration routes of this important disease.

One of Dr. Schug's other principal research interests is understanding biocultural adaptations to life the in semi-arid, monsoon climate of India. In the second millennium B.C., hundreds of small communities were established in west-central India. This period, the Deccan Chalcolithic, was a time of successful adaptation to the semi-arid climatic circumstances of the peninsula. People grew drought-resistant barley and wheat, kept cattle, sheep and goats, and maintained hunting and foraging traditions. Their communities were prosperous, populations were growing, and regional centers began to form. After 1000 years, the majority of these small farming villages and their regional centers were abandoned. One village, Inamgoan, persisted into a phase that became known as the Late Jorwe (1000-700 B.C.).

The skeletal populations from this and other Chalcolithic communities provide an opportunity for us to understand what changes occurred around 1000 B.C. that precipitated the collapse of so many settlements? What affect did these changes have on the human populations? How did Inamgaon persist where so many other communities failed? Why was this site too eventually abandoned? 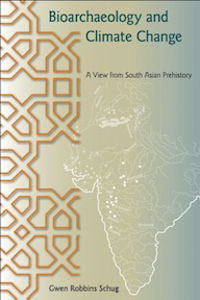 In a forthcoming book entitled, Bioarchaeology and Climate Change: a view from South Asian Prehistory (University Press Florida) , Dr. Schug examines evidence for climate change, environmental circumstances, and human biocultural adaptations in India during the Chalcolithic period. Climate change is often invoked as an explanation for culture change in South Asia. Because of the dramatic impact of the monsoon system on human communities, it is expected that climate change is the impetus when a way of life ends. Although archaeologists suggested climate change was responsible for the demise of the Deccan Chalcolithic settlements, based on early paleoclimate studies in the 1970's and 1980's, Dr. Schug's synthesis of recent paleoclimate research demonstrates that the semi-arid climate of west-central India was already well established when these communities were founded. The book was published as part of Clark Larsen's bioarchaeology series at UPF. It will be available after August 14, 2011.

While large-scale climate changes do not appear to have been responsible for the collapse of these settlements, development of unsustainable agricultural practices to feed the growing populations of the Early Jorwe phase (1400-1000 B.C.) may have contributed to the collapse. This hypothesis is supported by an innovative demographic analysis in Dr. Schug's book, which uses a new method for paleodemography to reconstruct population growth, fertility and mortality across the Early to Late Jorwe transition at Inamgoan. Demographic profiles are then combined with a new approach to subadult growth in the past (using subadult body mass and stature to examine emaciation rates in prehistoric skeletal populations). Dr. Schug's biodemographic approach to the question yielded a new model for understanding climate, culture change, and subsistence transition at the end of the Deccan Chalcolithic. Her innovative approach to skeletal populations has been praised by reviewers for deeply integrating the link between growth of populations and growth of individuals. This book provides a new way of understanding Indian prehistory but more importantly perhaps, it demonstrates the complexity of human-environmental interactions and calls into question the climate change paradigm in Indian archaeology. 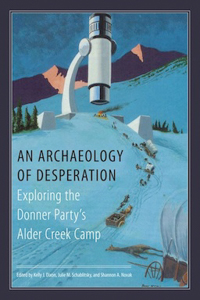 This year, a new book will also be released by University of Oklahoma Press entitled, An Archaeology of Desperation: Exploring the Donner Party's Alder Creek Camp. Dr. Schug completed the osteological identifications for this project, which examined life and death at the infamous Donner Party campsite. The immigrants in the Donner Party became stranded while traveling west through the Sierra Nevada Mountains in the winter of 1846–47. Some members of the party infamously resorted to cannibalism during the months they were trapped in the mountains. While human remains did turn up at a previous excavation of the Truckee Lake campsite, the Donner family actually wintered at a smaller campsite seven miles away. This book takes a holistic approach to the archaeological and historical record, examining evidence from the Alder Creek Camp through the lenses of history, archaeology, social anthropology, and bioarchaeology. Dr. Schug's chapter, "What Remains: bone histology and identification of a starvation diet" describes the use of bone microstructure to identify highly fragmented and burned bone recovered from the hearth. This project sought to discover whether any of the fragments were human and what other species of animals were present in the food refuse.