"[In the spring of 2010, I was] on leave [and had] several tasks to complete. One was to write a paper for publication on a ritual rock shelter in eastern Kentucky, a women's retreat/seclusion place for menstruation, birthing and initiation. I also [spent the semester studying] Aztec beliefs, and pilgrimages. Some of you who have had classes with me in the past 4 years may understand where all of this is coming from but others of you may be baffled." 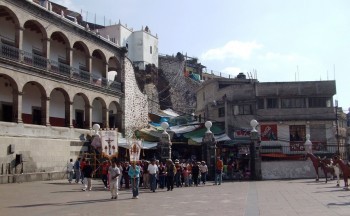 It began with a suspicion that that the shell heaps of the Green River were intimately connected to Mammoth Cave, up stream. Slowly this evolved into a thought of a ritual cycle-cave to shell mounds (why they have to be separated by 30 miles of river I don't know). Meanwhile I'd been reading about Mesoamerica cave research and was particularly excited by the volumes In the Maw of the Earth Monster and Stone Houses and Earth Lords ... in these two books I learned about a cave keeper sodality and the collecting and caching of stalactites. In 2000 I wrote a paper reviewing the evidence from 4 Paleoindian and Archaic Eastern US caves and put forth the idea that they were ritual caves for caves rituals, and never were habitation places. The paper was rejected by a journal. In 2005 and 2006 I presented other versions of that paper including 2 more caves. I have just this month learned that the 2005 paper is to be published in a book on prehistoric ritual and symbolic meaning.

Sometime in the past 4 years the realization that some of the bodies—specifically those found dessicated as "mummies"—may have been oracles instead of accidental deaths occurred to me. Oracles in caves and deities living in caves were cause for pilgrimages in Mexico. Perhaps here I should say that since 2001 I have been living part time in Guererro, Mexico and making friends with many Nahaut speakers. Their pilgrimages, however, never crossed my mind. I guess I had assumed that all of the pilgrim activity in this part of Mexico had been converted to the pilgrimages to Catholic shrines.

At the Society for American Archaeology meeting in Atlanta in April 2009 I heard a wonderful paper by an NC forest service archaeologist Scott Ashcraft, on the sacred places around Asheville that are part of the story of Judaculla. There was a sacred landscape in my "backyard".

At the beginning of the Fall 2009 semester I accidentally became aquainted with a marvelous book the Map of Cuauhtinchan #2, a document (codex actually) painted in the 1500s which has been bought by a student of mine in 1990 and 1991 when I taught in Puebla Mexico, and co-fieldworker on a survey project in Chihuahua. Pouring over this map for a semester I realized that the modern pilgrimages pass by many of the same places that the ancient pilgrimages did. These paths tied together sacred landscape. This realization led to two thoughts—1) I could tie together sacred places in the Eastern US by looking a key places and the ancient trails. I could add to the ritual places of shell mounds, dirt mounds, and ritual caves list by including all caves with "mummies". 2) If I go on pilgrimages in Mexico I will be seeing the ancient sacred landscape. I don't know to what extent these routes are recorded. And there is newly made sacred landscape that hasn't been recorded either, seen in hundreds of roadside shrines, usually to Guadalupe, marking a place where people can see her in a rock or formation or some other, or where her protection is needed such as at the base of a waterfall.

In December I led the first Dept. of Anthropology fundraising trip to Mexico for Virgin of Guadalupe day. On that trip we went to the important shrine at Chalma and found the rock shelter that had once been the destination of Aztec pilgrims but was Christianized. We also visited a giant ceiba tree some 15 miles away which is on the pilgrimage route to Chalma for communities coming from the north. Both are still major points of veneration, both are places where people leave umbilical cords, flowers and copal incense, and both have water. A miraculous stream begins under the ceiba tree and is today collected into 5 uterine shaped pools.

With these thoughts swirling around, I came to Mexico in January to spend two months reading colonial codices, articles about pilgrimages to Chalma and the Basilica of Guadalupe, Catholicism for Dummies, and several books on related subjects and hoping to go on the Chalma pilgrimage in February. I also had learned about May 3 rain petitioning from Jeff Boyer and know of a rockshelter where I think this petitioning happens—I wanted to make arrangements to attend that rite in May if possible.

I was disappointed to learn that the pilgrimage from my town of Taxco doesn't go until May (the hottest month of the year) and that it is quite unsafe for me to go alone. I also learned that much of the 24 hours of walking is passed in the dark since no one sleeps. I have been closely reading the 385-page discussion of the Codex Borgia, initially to find information on caves but now to educate myself about how to decipher Aztec codex symbols and to learn what sorts of places are ritually marked in Aztec worldview. I have read the marvelous 1991 book, Aztec Ceremonial Landscape, in which I learned about a series of shrines around Mexico City where children were sacrificed to the rain god Tlaloc at the beginning of May. On a trip to visit a semi-famous Nahuatl bark paper painter Marcial Camilo I asked if his pueblo observed a rain calling rite in May? He spent the next two hours telling me not only about what his village does but what he and his wife do at another sacred place. On another trip to a pueblo (Ixcateopan) which houses the bones of the last Aztec Emperor, I learned of two more May 3rd festivals in east central Guerrero. 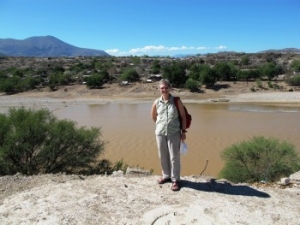 Dr. Claassen in the field 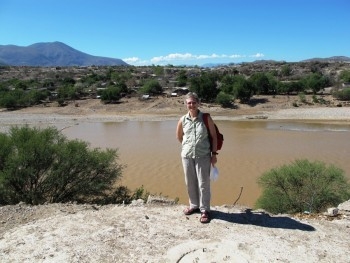